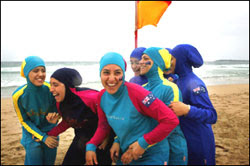 From Economist : A new study by JWT, an advertising agency, points out that the 6m or so Muslims in America are, on average, richer and better educated than the general population. Two-thirds of Muslim households make more than $50,000 a year and a quarter earn over $100,000; the national average is $42,000. Two-thirds of American Muslims have a college degree, compared with less than half of the general population. Muslim families also tend to have more children. So the perception that marketing specifically to Muslims is not worthwhile would appear to be wrong.

According to JWT, food, finance and packaged goods are the three consumer markets most affected by Islamic law. The global halal market is worth some $580 billion annually. In America an estimated 16% of sales in the $100 billion kosher industry comes from Muslims who lack adequate halal options.
The Burqini—a full-coverage swimsuit has been sold internationally, mainly online. As the name implies, the polyester suits are a cross between a burqa and a bikini, and are designed in accordance with Islamic law requiring women to dress modestly.
Pic : http://www.ahiida.com
Email Post
Labels: Market Muslim Religion Segmentation