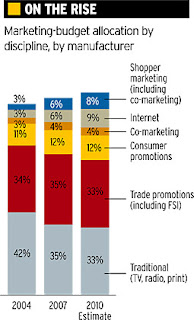 Shopper Marketing is differentiated in the sense that its aimed at shoppers engaged in the act of purchase, either online or offline. Offline, it would mean marketing aimed at consumers inside the store, moving along the aisles looking at displayed products. In such a case, the effort is an 'in-store' effort.

Why is 'Shopper Marketing' important, especially for FMCG marketers? In fact, now, according to a draft study by Deloitte from the Grocery Manufacturers Association, shopper marketing, is growing faster than Internet advertising, doubling since 2004 and on pace for a compound annual growth rate of 21% through 2010. Bill Gerba writes that 'Retailers and product marketers clearly seem to understand just how important shopper marketing opportunities are: about 70% of the 170 respondent marketers listed shopper marketing as either an "important" or "extremely important" as a part of their 2007 marketing strategy. But add in those who consider it "moderately important" and we're up at nearly 90% of respondents, which indicates a pretty significant trend to me.'

Coming back to the question of why shopper marketing has turned so important, one has to look to the shopping scenario of today. There are three major factors that have given rise to this phenomenon.

One, the scarcity of time that shoppers are beset with. Therefore for them, most purchases, especially the low involvement ones, don't get pre-determined before entry into the store.

Two, Commoditisation of brands has resulted in the death of differentiation leading consumers to becoming non-committal towards any particular brand.

Three, most out of the store communiques are ignored by the consumer due to the increasing communique clutter that every consumer is exposed to.

Keeping these points in mind, its safe to conclude that decision making is effected inside the store environment. In such a scenario a meaningful message inside the store can the tip the consumer in favour of a particular brand over others. But what limits the effectiveness of this phenomenon is that it works mostly with low involvement products and services. When it comes to high involvement products, brand attitudes are mostly determined outside the shopping environment with consumers seeking to validate those attitudes formed, on exposure to the actual brands.

Thus for FMCG marketers, Shopper Marketing will turn out to be very important. Most FMCG companies have started to fall in line with this. Late last year, Procter & Gamble Co., restated 11 years of advertising expenditures in its financial reports, largely to reflect spending on shopper marketing. The moving parts in the restatement suggest P&G is spending at least $500 million annually on shopper marketing.