The Customer is always right, is WRONG! 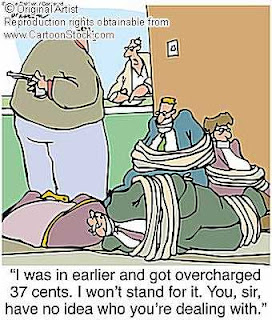 In response to my post titled, 'Acknowledging a complaint', one of my students narrates an incident that she witnessed at a retail store in Bangalore. The billing clerk accidentally billed a customer who was not exactly the first in line. This got another customer furious, as he felt he should have been billed first. He got to point of being abusive even though the billing clerk, a lady, tried her best to explain why the mistake had happened. This customer then went on to call the store manager, resumed the shouting spree, telling the billing lady to shut up and bill. The store manager on his part, kept mum, and did nothing to manage the situation.

I guess most of us have witnessed such rude customers venting their anger in the most inappropriate of ways. How are such situations to be managed?

I am reminded of the case of Mrs. Crabapple and her patronage to Southwest airlines. She frequently flew on Southwest and was constantly disappointed with every aspect of the company’s operation. In fact, she became known as the “Pen Pal” because after every flight she wrote in with a complaint.

Now that's the best response to some idiots who as customers make employee lives miserable. In this particular case, I am sure it would have been impossible even for the store manager to tell off the rude, abusive customer. I am pretty sure the management of the store would not have taken kindly to such an act. Plus the billing clerk had erred. Therefore trying to calm the situation down would be the best approach. For this, the store manager has to take ownership of the 'situation' and control the rest of the proceedings, whatever they may turn out to be. From what was narrated to me, I feel the 'calming effort' may not have worked. In such cases, the store manager must later direct his efforts to helping the billing clerk cope with the trauma that lingers from the encounter.

But remember, at times, it makes good sense to give the customer the boot!

EASY said…
YES, the customer is always right. There vare always oddball examples to the opposite, but people in sales should see the bigger picture, like this:
http://www.ronmartin.net/blog/archives/559
Dec 12, 2007, 8:44:00 AM