The lesson in 'bouncers' 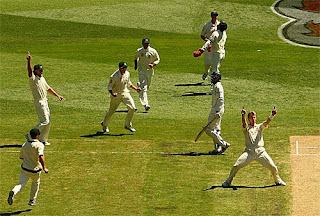 Watching India get pummelled into submission is common sight especially in Australia. My reference is to the Indian cricket team.

But what caught my attention more were two comments stark in their contrast. The first one was by Sunil Gavaskar. Watching Brett Lee bowl short pitched snorters, Gavaskar in his condescending tone warned about how this was futile, considering the fact that both Laxman and Sachin were battle hardened veterans. Exit Gavaskar, enter Ian Chappell. Chappell had a different take on the 'bouncers' He noted that both Laxman and Tendulkar were tending to weave away from the bouncers, rather than attack them with hooks or pulls. And so this was good enough reason to keep bowling short deliveries.

Surely enough, the tactic paid off. Laxman, trying to get out of the way of a bouncer fended with his bat, resulting a ballooned catch to Ponting in the slips.

Wish Gavaskar was smart enough to have heard what Chappel said. There's quite a lesson in his observation. A lesson that makes winners, win, time and again.

For marketers, the lesson? Quit singing paeans to your products and services and keep your eyes firmly on the consumer. His changing self is what must pilot what you do.