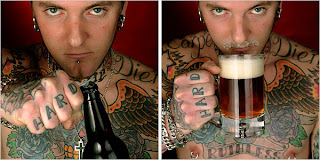 'In this world, bigger is always better, and why not? Hummers rule the road and 16 percent alcohol pinot noirs rule the wine ratings. Why not a beer like Stone Ruination I.P.A., so-called, the brewery proudly asserts, because of the ruinous effect of “this massive hop monster” on your palate. Are you man or woman enough for this beer?
Many beer lovers are aghast at the creative liberties American brewers are taking with traditional styles, feeling that the bigger-is-better principle is reducing American brewing to the equivalent of a frat party.
But to the brewers themselves, it is a matter of creative pride, not to mention patriotism.'
Read the complete NY Times story here
Pic : NY Times
Email Post
Labels: Product Development