Google is not invincible 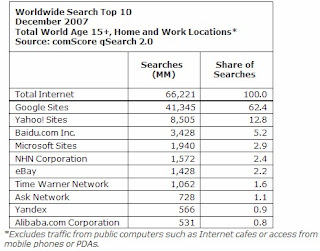 Techcrunch reports that While Google dominates the top slot in search both in the U.S. and worldwide, with a global search market share of 62 percent, there is still a lot of elbowing going on below, especially when you look beyond the U.S.
In a comScore ranking of the top-10 global search engines as measured by number of searches during the month of December, 2007, Yahoo comes in at a distant No. 2 with only 13 percent of global share. (Although, in the U.S., Yahoo actually gained a half-point of share in December, whereas Google dipped 0.2 percent). The big surprise, though, is the strength of local search engines in countries that don’t use the Roman alphabet. No. 3 on the list is not Microsoft, but Chinese search engine Baidu (with 5 percent share, versus Microsoft’s 3 percent). No. 5 is Korea’s NHN Corporation, which operates the Naver portal and search engine. Creeping up on Ask’s No. 8 spot, is Russian search engine Yandex. And Alibaba (which may include Yahoo China) brings up the rear at No. 10.
In China, Baidu.com led the search engine market in 4Q07 with a 60.1% share, and Google came second with a 25.9% share, followed by Yahoo China with 9.6%, according to Analysys International, Reuters reports. Though Baidu’s share was flat compared with the third quarter, Google’s increased 2.2 percentage points (up from 23.7% in Q3). The US search giant recently launched a mobile SMS search service in China.
Email Post
Labels: Internet Search statistics