What Indian Fast food can learn from McDonald's 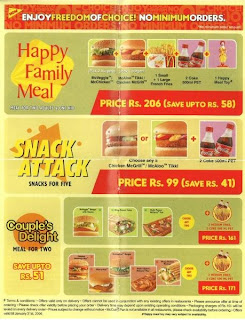 According to me the reason why we can't have a chain of Indian fast food has more to do with our not having grasped the reasons behind the success of the big daddy of it all, McDonald's. This fast food behemoth has turned the lowly burger into an enduring business that almost epitomises what the so called western invasion of cultures is all about. The key to this explosive growth has been the creation of a system with minimal human input (machine driven) that ensures that a standardised burger is churned out by thousands of 'assembly lines' around the world.

Indian food businesses must develop competencies in designing a near perfect system that can guarantee the creation of Indian fast food with an obsession for standardisation. Now that's a near impossibility. You see, as in the case of McDonald's, maybe someone can make a better burger, but no one can run the burger business the way McDonald's does.

Note what John F Love recorded in his brilliant book on McDonald's, 'Behind the Arches'.

'McDonald's changed all that by showering the lowly hamburger, french fry and milk shake with more attention, more study, and more research than anyone had dreamed of doing. The genesis of that work was the realisation by Turner and Kroc that the McDonald's format gave them an enormous opportunity to streamline service in the same way as manufacturers had streamlined assembly plants years ago. Their desire for quality motivated them to perfect an operating system, but it was the McDonald's ten-item menu that made it possible.'
Email Post
Labels: Fast food Standardisation

Kriti said…
But then Indian Curries & RTE are following standardisation & are moderatly sucessful esp in the West India... Saravana Bhavan & MTR are sucess stories in South.. Why then cant we replicate a MC Donalds?
Feb 1, 2008, 11:15:00 AM