Blinded to sights and sounds or is it sensory adaptation? 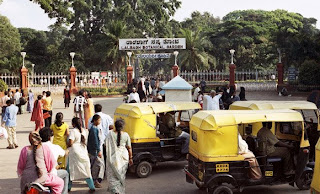 "Quite so," he answered, lighting a cigarette, and throwing himself down into an armchair. "You see, but you do not observe. The distinction is clear. For example, you have frequently seen the steps which lead up from the hall to this room."
"Frequently."
"How often?"
"Well, some hundreds of times."
"Then how many are there?"
"How many? I don't know."
"Quite so! You have not observed. And yet you have seen. That is just my point. Now, I know that there are seventeen steps, because I have both seen and observed.
- Sherlock Holmes, Dr. Watson; 'A Scandal in Bohemia'
Sugata Srinivasaraju's lament in the piece, 'My City, Their Eyes', where he states that 'Bangaloreans are often blind to their backyards, but visitors carry a sight that sifts the city with far greater precision', could have been avoided had he understood what Sherlock Holmes tried to tell Watson.
In Marketing lingo, the process of getting used to a place so much that people get blinded to its sights is termed, 'Sensory Adaptation'. The term adaptation refers to 'getting used to' certain sensations, that is, becoming acccomodated to a certain level of stimulation.
Every sight and sound a city throws up is a stimuli for our senses. Should we live in a city long enough, our senses get so used to such stimuli, we tend to ignore them, even get blinded, never stopping to notice and respond. To the foreign students, the sights and sounds of Bangalore are worth responding to, simply because the stimuli is fresh and new; something that their senses are keen to respond to.
Sensory Adaptation is a pressing problem every Marketer faces. Consumers adapt quickly to brands and their communiques, so much, they totally ignore it. The only way to get them to respond to a brand stimuli is by ensuring that the entities of a communication process are managed in way that makes them different, stand out from the marketing clutter within which they operate. That is, employ a unique 'sender of the message', a unique method of encoding, a unique message, a standout media vehicle, among others. That way consumers will stop and take a look. Else they move on, blind to your brand.
Email Post
Labels: Sensory Adaptation