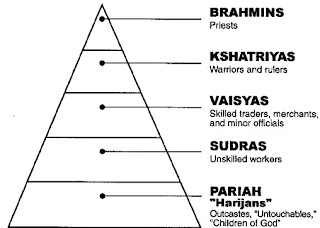 Anuratti's research work titled, 'Incidence of Illegitimate Power and its impact on effectiveness of OD initiatives', looked at the incidence of illegitimate power from a 'diversity' perspective; diversity qualified on gender and ethnicity lines.

The conclusions drawn strongly pointed to 'ethnic diversity' playing a major role in the incidence and practice of 'illegitimate power' which then contributed to dilution of OD initiate effectiveness. Having worked with Anuratti on the same paper, I saw conclusive evidence that proved 'ethnic groups' colluding in organisations to exert power that could be deemed 'illegitimate'.

Ethnicity is an important variable in caste based reservation programs. Though the recent Supreme Court ruling did not raise the kind of emotions we saw in the past, it still remains an emotive issue. Though there can be debates on how to resolve the caste issue, one thing is certain; Caste based discrimination is alive and kicking. What's disturbing is its incidence and practice within corporate India.
Sumathi Nagrath in her article titled, 'Of Merit and Prejudice' points to the practice of ethnicity based discrimination in Corporate India.
'An empirical study of corporate India reveals the uncomfortable fact that many, if not most, business houses appear to give ethnicity undue importance while hiring. Marwari-owned companies are filled with Marwaris, Gujarati-run businesses prefer Gujaratis, Bengali-owned firms like to recruit Bengalis. This pattern of ethnic choice appears to plague almost all enterprises, and it hurts communities, such as Dalits, which have traditionally not owned (or been allowed to own) businesses.
D. Parthasarathy, professor in the department of humanities and social sciences at IIT Bombay, says that apart from evidence that discriminatory recruitment practices exist in corporate India, company executives often also have “unconscious biases and prejudices in their recruitment patterns”.'
While its important to approach the ethnicity issue with care its also important to bust the myth of 'Merit' that has been bandied about by the anti-reservationists.
Consider what Arun Maira has to say; 'India Inc. can participate in resolving problems of exclusion by examining the concept of merit more closely. “How do you devise a test to judge merit,” Maira asks. The objectivity of tests, such as the GMAT, “is biased in favour of people already in the system” and are under question all over the world.
Exam results also discount the social and economic barriers a candidate had to overcome to achieve his or her grade. Therefore, an under-privileged student who struggled to receive basic education, faced repeated and frequent humiliation, and fought acute poverty to get 70 per cent in an exam could actually be far more capable that a candidate from a privileged home who gets 90 per cent. “Those in the system need to look for talent that is potentially there but is not expressed in the way that they are conditioned to look at it,” Maira says.'
There are no easy answers to an issue that is extremely emotive and complex. Any proposed solutions must be enforced with care. For now, the honourable supreme court ruling has stifled passions and is a welcome judgement to what is otherwise an 'explosive' issue.
Email Post
Labels: Caste System Merit Myth Reservation Program