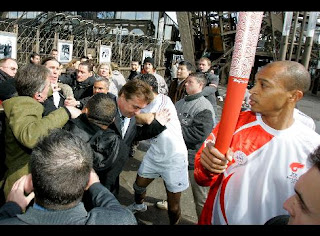 Publicity is a potent tool of Marketing Communication. As the carrier of the message happens to be a neutral entity, consumers tend to listen to the message and even react to the same. Were the same message have emanated from the marketer the very same consumer would tend to ignore the communique'.

Has the Tibetan plight ever been as visible as it is now? The Chinese communist regime with its high handed tactics has always managed to quell any dissenting information from reaching global public. But the tables have turned.

The Olympic torch is now making its way across neutral, even sympathetic (to the Tibetan cause) locations. What better time to disrupt its journey and attract the attention of world media, thus the world!

The Tibetan cause now regularly features on the front pages of almost every newspaper across the world. Ditto for news channels. And everyone's beginning to take notice. Sarkozy has threatened a opening ceremony boycott. Hilary Clinton has recommended the same.