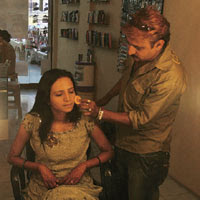 Its something I've said before. The universality of consumption aspirations. It cuts across the length and breadth of India sweeping with it, even folks from smaller towns and villages.

Take the beauty business. To want to look good is universal. HT Mint reports that cities such as Surat, referred to as tier II by most people because they aren’t as large as the metros or other big cities, nor as sophisticated as markets, were once considered conservative by companies selling beauty and beauty products. Yet, in Surat, the city’s women have surprised retailers and manufacturers with their desire to look good, their adventurousness in trying out new things, and their willingness to pay big money for beauty treatments and products.

A soon-to-be-released study by the Future Group, of which Pantaloon Retail (India) Ltd, one of India’s biggest retailers, is part, and the National Council of Applied Economic Research (NCAER) says the ratio of spending to earning is higher in cities such as Nagpur, Jaipur, Coimbatore and Surat, which form India’s Top 20 cities outside the eight megacities, than in the Big 8.