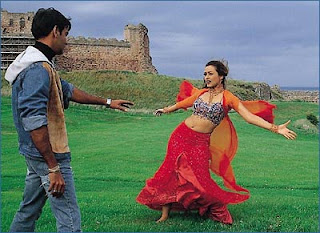 Having endured what can be described as pure torture while watching a Bollywood movie a few weeks back, I am not too sure if I agree with Rosch Christoph who says, 'I am planning to go to India and watching Bollywood films has helped me to know the country better, its society and culture'.

But its mighty interesting to note that Universities that include the University Of Manchester, University of California, Berkeley (UC, Berkeley) and Cardiff University are now offering courses on 'Bollywood'. In fact Stanford University has a student-initiated course titled, 'Running Around Trees: Exploring the Bollywood Song'.

Interestingly, it's not just the colour and fun that's getting these students hooked to such courses, but serious aspirations to build a career in India. Overseas students eager for a career stint in India find Bollywood flicks a useful medium to enhance their knowledge about the country.

I wonder if that's quite the wild goose chase. I am also reminded of what Kerala superstar Mamootty once remarked, that Bollywood cinema cannot be equated with Indian cinema. In fact a mere fourth of the total Indian films are from Bollywood. The rest come from other parts; a large number of this is from the South with Tamil movies leading the tally.

Hey, the closest I came to running around a tree was... best left unsaid :)

Hindi movies are a definite joy ride to me,, especially the outright popcorn stuff, whr the protagonist’s family never stops getting bestowed with the best of cars, parties, obstacle free love lives n the likes…

But the above, by far do not represent any Indianism,n bollywood cld no way be a grounds to deciding on having a career in India.. stating the obvious though.. n this time truth is definetly stranger than fiction.
May 15, 2008, 1:59:00 AM