Tracks over Flights; Bangalore to Chennai 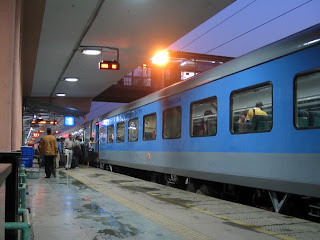 Reasons why commuters in Bangalore prefer 'tracks' (read, Shatabdi Express) over flights, while making that trip to Chennai.

One, The actual flight duration between both of the cities may be 30 minutes. But if you calculate the reporting time, the time to check in, collect baggage, and reach the city from the Airport in Devanahalli, it could turn out to be longer than a five-hour Shatabdi Express ride.

Two, A nice nap, no elaborate security checks, arrival in the heart of the city and a much lighter strain on the wallet are reasons for many passengers to skip the flights and opt for rail journey instead.

Three, The train fare for AC coaches ranges from 550 to 1200 rupees. Air fare costs anything between 1600 to 7000 rupees, in addition to the cab charges of almost a two-hour drive to the city.

In fact the commuters preference for the train to Bangalore has forced Southern Railway to operate more trains from Chennai to Bangalore, 10 on Wednesdays and Fridays and 8 on other days.

Anonymous said…
You can search about Indian Railways, Ticket Availability, PNR Enquiry, Check Fare, Find Trains, Find Railway Stations, Train Routes, Train Schedule, Trains between stations, live train info, Spot your train, arrivals, departures, rail network map and all other features on a new site which is not developed by Indian Railways, but a third party, you may know the name, that is http://www.indiantrains.org/

arunsubru said…
I was searching for blogs related to india tourism, india travel found your blog as an interesting one with relevant information. Most of the time i wont comment on blog especially on blogspot.com blogs, but with regard to this i cant resist myself from commenting. I enjoyed reading your post. India is truly a great place with lots of diversity and is a unique place in the world. Even in adverse economic situation india tourism industry has performed well. Being a person who is always eager to know more about India and india tourism, i thought that i would share my twitter and my india tourism blog with you. You can follow my updates on @india_tourism in twitter or find my india tourism news and updates in india travel blog and find tour packages in india tours
Aug 10, 2009, 4:03:00 PM

Unknown said…
Thanks for sharing the post! Get the Best Online Bus Ticket Reservation Services in all over India in one step with Ticketgoose. TicketGoose is not only providing the Online Ticket Booking Services, it is providing services like what are the places to visit in each and every state. We had Travel agents to contact in each area for all states.
SPK Travels
Nov 26, 2012, 10:55:00 AM

sam said…
My first visit to your site is been a big help. Thank you for the efforts you been putting on making your site such an interesting and informative place to browse through.
Jan 22, 2013, 4:08:00 PM

Jack Witson said…
My first visit to your site is been a big help. Thank you for the efforts you been putting on making your site such an interesting and informative place to browse through.
Singapore to Kuala Lumpur

Online Hotels Booking said…
The article is clearly written and every point is factual and is no-nonsense. I have surf the internet looking for topics such as these and it is here where I find it written and stated well.
Online Hotel Booking
May 31, 2013, 10:21:00 AM

David John said…
Superb article ,I really appreciated with it, This is fine to read and valuable pro potential,I really bookmark it, pro broaden read. Appreciation pro sharing. I like it.
car hire in singapore
Jun 5, 2013, 12:26:00 PM

Unknown said…
To book your Delhi to Chennai or Chennai to Delhi flights at very low prices contact cheap flight to MAA that offers cheap airfares and cheap air tickets for Chennai and Delhi, and thus let you enjoy a great cheap but easy air travel.
Aug 16, 2013, 12:44:00 PM