The fall of 'Wine snobbery' in India 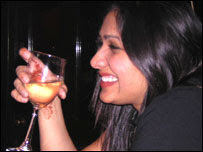 The best thing that's happened to wines in India is that it 'has recently stepped out of the snob circle to the affluent middle classes'. Now that's according to Abhijit Kabir of Indus Wines.

And I quite agree. The likes of Indus wines have now made the product accessible to the upper middle class. As Kabir says, earlier it used to be snobs sipping the drink of gods. Part reason behind this change of 'scene' is the emergence of Indian wines and its availability in retail stores. It sure has been difficult for the likes of Indus wines to get the beverage to retailed across stores in India, but the availability of this beverage has improved across store shelves.

The penetration level that wine has in the Indian market, I guess is minuscule, compared to other alcoholic beverages, but it does have a bright future. Even among the Indian middle class. Among the likes of me. I don't drink the normal alcoholic stuff. But I definitely don't mind and may even enjoy nursing a glass of wine. But for the likes of me to venture out to try a glass would require the likes of Indus to further drop prices. Something tells me they will, in time.