What's with the seal anyway? 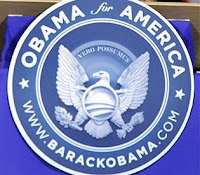 Obama's turned into the master strategist. Or should I say he always was? He carefully crafted his strategy in winning the nomination despite not getting either the popular vote or the 'big' states. Now that he is in the nomination saddle he's turned on the strategy machine, big time. Note how smart he has been since then. To placate the Jewish community he went on to declare his rooting for Jerusalem as the undivided capital of the state of Israel. Add to this the controversy of headscarved kids being asked to move out of a photo session with him and you know he wants to get his 'christian' credentials right.

Well, now comes the Obama seal. One that's aimed at telling the air heads that he's about 'change' and that together 'THEY CAN'! Obama needs the seals and the rhetoric. That's what gets his image spot on with the young masses, drunk on a heady brew of thoughtless rhetoric. Tell you what, that's all they care about. The image is good enough. It doesn't matter that they support someone who's an almost zero on achievements. I mean, past records.
As to whether the image and its fanatical following will make it to the White house remains to be seen. The only worry for the Obama camp should be whether he pushes his 'image' too far. The resulting 'turn off' could alienate voters, though I doubt whether the airheads would ever get it. For some, the seal's taking it too far.
Note Michael Graham, 'I, for one, like the New Seal of the Obama-dency. It’s so much more hip and avant-garde than that old, patriotic thing. The shield of stars and stripes representing the USA? Gone. Replaced by the royal “O,” and an image of the rising sun, symbolizing, uh, imperial Japan, maybe? I’m not really sure.
And changing that tired old “E Pluribus Unum” was a masterstroke. On the Obama seal, the motto is “Vero Possumus,” which loosely translates to either “Yes, We Can” or “Let Them Eat Possum” (an appeal to disaffected voters in West Virginia).
Regardless, millions of Obamaniacs are ready for Barack to be president, and they want it right now. They don’t see the point of all this “will of the people” nonsense. “Why do we have to listen to the stupid Constitution, anyway?” they wonder. “Why can’t we do what we want?”
Then again, what's with the seal anyway? Wanna know? Maybe not, would you get it even if I said it?
Email Post
Labels: Barack Obama Brand Image US elections