When I want 'real news', I go online 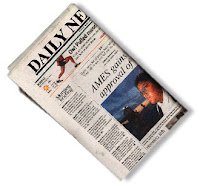 I bought into the promo offer by DNA a few months back, and now that DNA is in Bangalore, I receive my dose of morning news from the TOI and DNA. Its fun readin' both these newspapers as they provide me with my requisite dose of dumbed down news that I find pretty humorous. And then, when I need a fix of 'real news', I turn to the Net. My fix includes Drudge, WSJ, Realclearpolitics, American Thinker, Townhall, Pajamas Media, Politico, Human Events and a few others.

Now I ain't cancellin' my newspaper subscriptions as yet, but I think the fact that I depend on online news media for my 'real news' should worry the likes of TOI and DNA. According to a survey by the Washington-based Pew Research Center for the People & the Press, the Internet has surpassed newspapers as the main source for national and international news for Americans. Television, however, remains the preferred medium for Americans. Seventy percent of the 1,489 people surveyed by Pew said television is their primary source for national and international news. Forty percent said they get most of their news from the Internet, up from 24 percent in September 2007, and more than the 35 percent who cited newspapers as their main news source.
Email Post
Labels: News Media

Unknown said…
Sir, i think this is because of the stale news that papers give you in the morning and the fresh updates that you get on TV and online.

Just imagine getting the news updates continuously on your mobile, PDA, iPod. I think that would top all the lists. Its all about how fresh and updated the news is and how easy it is to get.
Dec 25, 2008, 11:16:00 PM