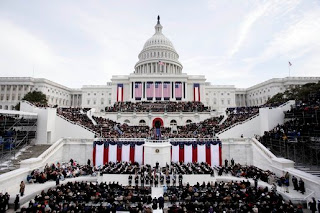 When the economy faces a collapse, any sort of consumption is good!

But then, 'liberal mafiosi' in the US engage in selective applications, based on their whims and fancies. They had a problem with Sarah Palin's wardrobe cost, but they go mum when its Obama's inauguration. The price tag for President-elect Barack Obama's inauguration gala is expected to break records, with some estimates reaching as high as $150 million. Despite the bleak economy, however, Democrats who called on President George W. Bush to be frugal four years ago are issuing no such demands now that an inaugural weekend of rock concerts and star-studded parties has begun.

Hey, what about the intellectuals? The ones that preach, but then the cat gets their tongue when it suits them? What about the airhead Hollywood/celebrity brigade? Couldn't they advocate the money be sent to sub-saharan africa instead?

Me? Hooray for consumption! Doesn't matter if its a wardrobe or the ascension of the messiah!