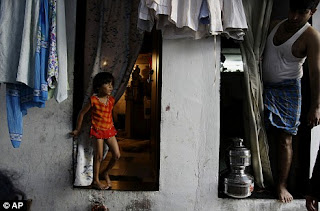 'They are making out that India is a Third World, dirty underbelly, developing nation,’ snorts Amitabh Bachchan, one of the country’s leading film stars and a powerful, patriotic voice. Now home to thousands of ‘outsourced’ British jobs, such as call centres, many insist that such brutality has been banished from the ‘new’ India.
Yet the truth, as I discovered during a chilling week-long investigation, is more disturbing than anything dreamt up by the creators of Slumdog Millionaire. For in Mumbai, as well as in other major Indian cities, hundreds of young children have had their arms and legs chopped off; scores of others have been blinded. The gangs also pour acid on to the children’s bodies, leaving them with suppurating wounds.
Their suffering comes down to one thing: money. In a country of 1.2 billion people, where the gulf between rich and poor is vast, there are an estimated 300,000 child beggars. By no means all are mutilated by the beggar mafia, but those with the worst injuries do make the most money — up to £10 a day for deformed children, a fortune in a country where millions survive on just a tenth of that.'
- Andrew Malone, 'The real Slumdog Millionaires: Behind the cinema fantasy, mafia gangs are deliberately crippling children for profit.'
Pic: http://www.dailymail.co.uk
Email Post
Labels: Indian Slums Poverty Slumdog Millionaire

Soumya said…
Dear Sir,
I just refuse to understand the logic behind all this crap being written about how the movie depicts India.I happen to read an article in yesterdays Times Of India as well by one prominent person on how we should just skip the movie as it depicts India throught the eyes of a foreigner.
What I fail to understand, is this total disconnect that people seem to have to reality.Why does it hurt, when someone tells you that things are not all rosy in India.The truth is the upper class people really like to believe that India is where they live in and not the slum that is there right next to him.How stupid !!
Ok we are doing great in this time of recession and all that but why cant we embrace the fact that while we are doing well, all s not well yet.Sure things have improved a great deal, but a lot more needs to get done , before we can say "Incredible India "
Jan 28, 2009, 9:41:00 AM