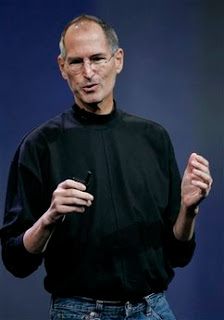 The best thing about havin' inanimate objects represent a brand is that they won't croak, ever! That's surely is a non-possibility if there's somethin' human behind the brand. Humans kick the bucket, don't they? The question then is, what about the brand? Would its equity erode, now that the homo-sapien has exited?

That's the question on everyone's mind, as everyone knows that Steve Jobs' not in the pinkest of health. Apple's as much Steve as Steve is Apple. There is no CEO more identified with his company than Steve Jobs, the iCEO of Apple. Since his return to Apple in the mid nineties, he has doubled Apple’s penetration of the entire PC market and dominated the high-end market. His creative vision is responsible for the creation of three iconic products: the Mac, iPod, and iPhone. Its helpful that Steve Jobs has spoken publicly about his ailment. After months of concern about his health and weight loss, he has said that he is suffering from a nutritional ailment and that he plans to remain Apple Inc.’s chief executive officer during his treatment.

Here's wishin' Steve the best of health and many more years at Apple. It just ain't me, I guess, its the Apple legion out there that must be prayin' for Steve. Surely that should help.
Email Post
Labels: Apple Brand Mortality Steve Jobs