Mortals are why we have miracles 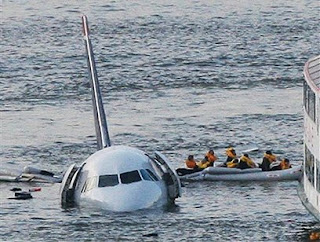 Service brands are built by nothing but the people who serve. Consumers put themselves in the hands of these people to the extent that, at times, they do so with their lives. Take a moment and imagine that. There are services out there that you avail only because you put your trust completely into the hands of people who deliver that service. And again, at times, these service personnel rise to the occasion to the extent they even save your life.

Imagine that!
Captain Sullenberger, 57, the US Airways pilot who safely brought the wounded Airbus A320 passenger plane to rest on the Hudson river on Thursday is one such man. And in doing what he did, how did he react? In spite of the miracle that he was responsible for, he stood, calmly, inside the glass waiting room at the New York Waterway terminal on Pier 79, speaking to police officials. His fine gray hair was unruffled, and his navy blue pilot’s uniform had barely a wrinkle. “His tie wasn’t even loosened,” said Edward Skyler, a deputy mayor of New York City, who stood nearby.
When congratulated on his feat, according to Michael A. L. Balboni, the state’s deputy secretary for public safety, this is what he said in the most unaffected, humble way, 'That’s what we’re trained to do.' No boasting, no emotion, no nothing. Wow!
The worst that can happen to an airline brand, is a mishap to any of its flights. But what saves the day for the brand is the people who serve. In the case of US airways, that man was, Captain Sullenberger!
Email Post
Labels: Service Brands

Raneeth Reghu said…
For service industry the excellence of their people is imperative not just in terms of them being able to build a brand but also beat the competition around. You can have the best systems and processes in place but its ultimately the people who use those intagibles(processes,systems) to deliver the tangible(service).

The pilot now hailed as Hero of the Hudson got in all his 40 yrs of experience to effect a breathtaking water landing. WHat this news also did was it broke a series of negative news that had become a regular headline in our newspapers whether its terror attacks or corporate frauds. That is something that we all longed for.
Jan 17, 2009, 11:51:00 PM