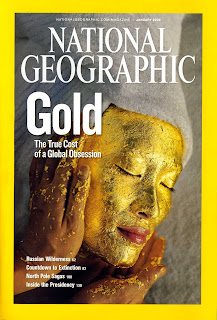 NG: India's fixation stems not simply from a love of extravagance or the rising prosperity of an emerging middle class. For Muslims, Hindus, Sikhs, and Christians alike, gold plays a central role at nearly every turning point in life--most of all when a couple marries. There are some ten million weddings in India every year, and in all but a few, gold is crucial both to the spectacle and to the culturally freighted transaction between families and generations. "It's written into our DNA," says K. A. Babu, a manager at the Alapatt jewelry store in the southwestern city of Cochin. "Gold equals good fortune."
This equation manifests itself most palpably during the springtime festival of Akshaya Tritiya, considered the most auspicious day to buy gold on the Hindu calendar. The quantity of gold jewelry Indians purchase on this day--49 tons in 2008--so exceeds the amount bought on any other day of the year throughout the world that it often nudges gold prices higher.
Throughout the year, though, the epicenter of gold consumption is Kerala, a relatively prosperous state on India's southern tip that claims just 3 percent of the country's population but 7 to 8 percent of its gold market. It's an unusual distinction for a region that has one of the world's only democratically elected Marxist governments, but it is rooted in history. A key port in the global spice trade, Kerala gained an early exposure to gold, from the Romans who offered coins in exchange for pepper, cardamom, and cinnamon to subsequent waves of colonizers, the Portuguese, Dutch, English. But local historians say it was the region's revolt against the Hindu caste system (before which the lowest castes were allowed to adorn themselves only with polished stones and bones), and the mass conversion to Christianity and Islam that followed, that turned gold into something more than commerce: a powerful symbol of independence and upward mobility.
Email Post
Labels: Gold Consumption

Unknown said…
About Akshaya Tritiya we used to encounter long waiting queues of customers, some waiting from 6 AM, to meet the 8 AM opening time of ICICI Bank. Some customers would walkin early armed with the token and ask for a particular muhurtam for the gold to be delivered. The day would be filled with customers telling us and each other how auspicious it was, how it would effect them and so on. Gold is always a welcome in any Indian family, anytime. May be because it is evasive and costly or just simply it is the safest investment.
Jan 3, 2009, 2:31:00 AM