Optimism or blinded by the rhetoric? 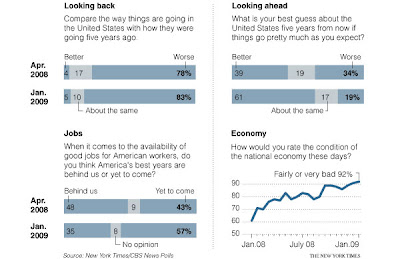 Huffington Post calls it 'Optimism sweeps the nation'. Of course, we are talking the Obama swearing-in that's a few hours away. But spare a thought to what 'really' awaits America.

Vindication is being expressed not in words but in deeds -- the tacit endorsement conveyed by the Obama continuity-we-can-believe-in transition. It's not just the retention of such key figures as Secretary of Defense Bob Gates or Treasury Secretary nominee Timothy Geithner, who, as president of the New York Fed, has been instrumental in guiding the Bush financial rescue over the last year. It's the continuity of policy.'

The 'reality' that awaits America is a continuation of the Bush era policies. That's 'cos there ain't anything better that Obama knows or can do!