The Marketing Lesson in 'Pink Chaddis' 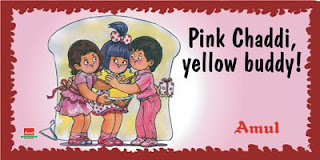 The last I heard, The 'Pink Chaddi' campaign, launched by the Consortium of Pubgoing, Loose Forward Women, had attracted hordes of members, in fact, the number has now touched 34,032 and still counting, making it one of the most popular sites these days.

The marketing lesson in Pink Chaddis? It's a lesson in Viral Marketing. Why did the Pink Chadddis go viral? One, its the issue; the more emotive, the better. Surely, every sane Indian citizen was outraged at what happened in Mangalore. Each in his own way, wanted to vent what they felt about the whole issue, and the Pink Chaddi provided some of 'em with that avenue.
Two, the nature of response (the message). Cloaked in humour the Pink Chaddi tackled the issue at large, in a manner that left us grinning, yet thinking, what a brilliant way to shame the perpetrators.
Three, the target segment for the campaign. This segment, though included people from all walks of life, was primarily carried forward by a set of people who were young, enthusiastic and the kind that were not willing to take things lying down. Viral campaigns better work if they are aimed at such a demographic. The Pink Chaddi was embraced wholeheartedly by this group.
Four, the medium. the primary medium was the Internet with the Blog being the initiator. Viral campaigns spread exponentially if Internet is used. Subsequently, it helped that mass media picked it up and the resulting publicity added to spreading the word.
The lesson for marketers watching this campaign are many. What's interesting to note is that many a times, viral campaigns are conjured up by people who aren't specialists at such campaigns. And therein lies the greatest lesson. That its a level playing field available for anyone out there. In all probability its the common man who will play the viral game the best.
Email Post
Labels: Pink Chaddi Campaign Viral Marketing