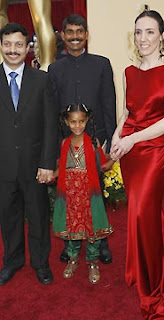 Amidst all the Slumdog mania, don't forget a 39-minute documentary called 'Smile Pinki' that has won the award for best short documentary.

The documentary tells the real life story of Pinki, a six-year-old Indian girl who was born with a cleft lip in the village of Rampur Dhavaia village in the northern Indian state of Uttar Pradesh. Directed by Megan Mylan, an American, it documents Pinki's transformation from an introverted social outcast into a vivacious local celebrity after a 45-minute operation in 2007 funded by a US charity called The Smile Train.
Email Post
Labels: Oscar awards Smile Pinki