Akon in the ghetto? Ha ha! 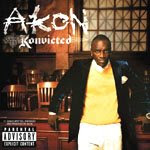 Listening to Akon singing 'Ghetto' gets me laughing. Don't get me wrong. The song's pretty decently sung. Its the lyrics that make me guffaw. Akon talks about life in ghettos. Surely life out there's mean. But when Akon sings, 'So you end up self destructing; On the corner with the tuli on the waist tight just got outta the bing doin stay time; Teeth marks on my back from the canine; Dark Memories of when there was no sunshine', I can't help but laugh, now that I know Akon's past.

Note Smoking Gun, 'Akon's ad nauseum claims about his criminal career and resulting prison time have been, to an overwhelming extent, exaggerated, embellished, or wholly fabricated. Police, court, and corrections records reveal that the entertainer has created a fictionalized backstory that serves as the narrative anchor for his recorded tales of isolation, violence, woe, and regret. Akon has overdubbed his biography with the kind of grit and menace that he apparently believes music consumers desire from their hip-hop stars. '

A brand that breaks the consumer's trust will then find it difficult to communicate to the consumer. That's because the consumer will have none of what the brand says, broken trust and all. There may even be times where consumers won't be able to suppress that guffaw.

Don't believe that? Ask me.