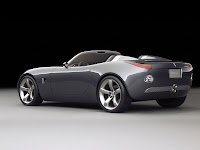 One of the dangers of trying to differentiate is the subsequent narrowing down of target consumer segment resulting in inflows that aren't enough to sustain a business that incurs higher costs. Blame the higher costs on the 'differentials'. Add to this the fact that competitors who differentiate at a lower cost end up convincing consumers that they shouldn't be forking out the kind of money for the 'original' differentiator; the problem's compounded.

Pontiac is on its way out precisely due to these very reasons. In spite of receiving rave reviews from critics the brand's not able to gets its consumer's confidence. The fallout? GM's shutting it down.
R.I.P., Pontiac. You will be missed.
Email Post
Labels: Brand Demise GM Pontiac

Urmi said…
I read this article on the future of electric cars and a chinese company called BYD in fortune mag...please read it...title goes something like 'Warren Buffet takes charge.'..
Apr 26, 2009, 3:27:00 PM