I need my Coffee! 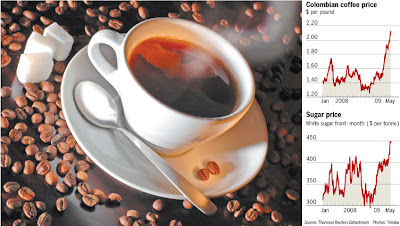 In spite of the recession going around, people still want their sweetened coffee fix. And soon that 'fix' will cost a lot of money.

FT reports that caffeine addicts face higher prices for their daily fix as the wholesale cost of both coffee and sugar rise sharply because of poor crops and robust demand. Until recently, it was widely assumed that the global economic crisis would damp consumption and prices for coffee. However, that forecast proved wrong, since demand for coffee has remained high, even while consumers have moved from cafés to home drinking. International coffee prices last week hit a seven-month high, rising to $1.28 per pound, up 22 per cent from their December low, in New York trading.

Unknown said…
i have gone throught your blog i need my coffee its really good and have some tips how to save money .here i am suggesting one like mba in india have a look its really pretty good and useful courses are there.
Jul 10, 2009, 6:30:00 PM