The Republican problem is Marketing 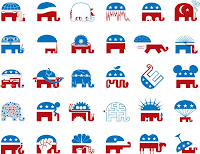 Lincoln Mitchell states, 'In business, rebranding is also what you do when you haven't updated your advertising jingle for too many years, your mascot's clothes need to be updated, or your product's colors need to be brightened or muted because of changes in fashion. The problems the Republican Party faces, however, will not be solved by rebranding.'
I agree.
Then he says, 'The quandary in which the Republican Party now finds itself is not due to a public relations problem, but stems from being strongly identified, and not without good reason, with the Bush administration. The Bush administration is broadly viewed as a failure, not because it didn't present itself well, but because it mishandled both the economy and foreign policy to disastrous effect. Additionally, some of the ideas which have been foundation of the Republican Party have, in the cases of radical social conservatism and unregulated financial sectors, become the views of an increasingly small minority of Americans.'
I disagree.
The problem with the Republican Party lies in the fundamentals of Marketing. The genesis to the act of Marketing is 'Segmenting' and 'Targeting'. That is, grouping consumers into distinctive segments and deciding to go after one or multiple segments with products that are designed and delivered as solutions. Where the Republicans messed up is when they moved away for their core voter segment and tried to appeal to multiple segments. The result was a party that appealed to none. An example to demonstrate that muddled appeal is their last presidential nominee, John McCain who was a liberal-conservative hybrid whose appeal drew in neither the conservatives nor the liberals. If conservatives did vote Republivan, attribute that to my heroine, Sarah Palin. Unlike what Lincoln writes, true conservatives aren't a minority. Don't look to Obama's coronation as testimony to the minority status that he proclaims. Its just that a little over half of America was taken in by the Obama rhetoric that sounded like gospel at a time when recession hit the Yankees bad. In fact, the reason why a socialist like Obama won is because socialist solutions sound sweet at a time when every economic failure looks like its capitalism's fault.
Obama won purely on to two simple reasons. One, John McCain. Two, the recession. Oh, add another to that list. The huge number of college attending and teaching liberal dimwits in America.
Email Post
Labels: Buzz Marketing Rebranding Republican Party STP