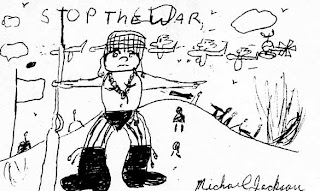 'The ink outlines may be crudely etched, the style described as impressionistic, at best. But for fans of Michael Jackson, the pose struck by the figure in the foreground is unmistakable. The picture, drawn by a 13-year-old Jackson in 1971 as a protest against the Vietnam War, shows troops taking a hill, backed up by blazing aircraft. It is to be included in an official book documenting the singer’s life, and can be published for the first time today.'

Its pertinent to note two interesting phenomenon. One, the interpretation of stimulus selected by any receiver may be driven by his prior expectation. That is, the viewer sees what he intends to see. The listener hears what he intends to. This is a distortion from what could be termed the 'real' interpretation. In the end, note, what holds is what's interpreted by the receiver.

The second phenomenon is even more interesting.

What's drawn or painted (or any other piece of art) brings with it a hefty price tag, if its a rare creation. That is, not many else can draw or paint the same way and so its valuable. For example, A Ravi Verma is a masterpiece because not many people are gifted enough to create what he did. Now this is normal practice. But when it comes to Micheal, it isn't what he's scribbled. Which by the way is so commonplace for kids. Instead, its that HE's the one who's done it that makes all the difference. Because its Michael is why it comes with a hefty price tag. Never mind, again, that kids draw pictures all the time. And such pictures sell for zilch.

For a brand to connect with consumers, it must engineer interpretations in its favour. If that means associating it with a celebrity, so be it. Let it be done. In the end what matters most is how a brand's perceived by its target consumer. Like they, 'in the eyes of the beholder'.

That's what gets it, its first sale.