The mantra of surprise has consumers hooked 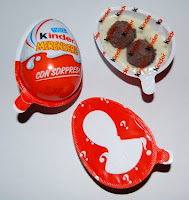 Its something he's picked up recently. Jaden's choice of a chocolate is dictated by whether there's a toy that comes along. Two brands scored. Cadbury's Jems & Kinder Surprise (Egg). But since then, Cadbury's has fallen off his radar. Kinder Joy on the other hand blazes on.
Why? Because the toy that Cadbury's gave him, repeated. That is, he got the same toy a second time around. But Kinder Surprise, they've always given him a new one. Its incredible. He must have by now bought at least a dozen Kinder Surprises. The fact is, he's never got the same toy again. And so his anticipation about the next one remains sky high. Therefore its a Kinder Joy that he wants. Tell you what, its even got me hooked. I shouldn't be surprised, worldwide there's a minor collectors cult around the Kinder toys.
What keeps us hooked on as consumers is a sense of anticipation. After all, in our real normal lives there's so much of repetitive order. Surprises and out-of-routine events are rare. Brands that can keep us hooked by promising us surprises are ones that grab our consideration. For Jaden, it was the promise of a new toy. Perfected by Kinder Surprise. Cadbury unfortunately lost him because they got into a repetitive pattern.
The mantra therefore is the mantra of surprise. Not just in consumer life, but in out personal one too. Wanna keep the attention firmly on you? Promise and sustain a surprise.
Email Post
Labels: Cadbury Kinder Joy Surprise