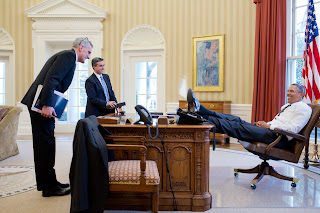 Vanity Fair thinks it his 'lean back style'. I know its his insolence coming through.

Truth is, Barack doesn't deserve to be President of the United States of America. Its another thing he is, and we know why.

Barack's 'style' represents who he is. In this case (the pic.), it isn't a put-on. His exhibition of 'lean back' is actually his telling the rest of the world he can put his feet on the Resolute Desk, and no one can do cr*p about it! Barack's telling us, 'Go fly a kite, I am President, I was elected, and so I can do what I want, and you can't do anything about it!'

Barack's probably the luckiest guy on earth. He gets to be president when he isn't even fit for a proper job. Remember, he's a community organizer who got to be president because they were too many moochers who decided they wanted their slothful ways preserved!

Now marketers on their part want to tap into people's social-self images. So if someone wants a display of insolence to go out to the rest the world, marketers will oblige them through products and brands.  In fact, without the products and brands there can be no convincing social self displays. Sure, one can without help put an insolent smirk on display. But what completes the picture are the clothes, the cuff-links, the shoes, the desk to keep one's feet on, and so on.

Barack's social image thus gets completed, and the message to the rest of the world, especially conservatives, is comprehensively constructed and propagated.

Its pity Barack's President. Its a pity America has more moochers now than value-creators.